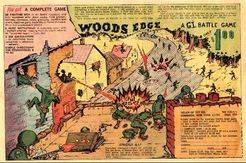 One of 9 games released by Helen of Toy that graced many a comic book from the late 50's into the early 80's. Each game was usually shipped in a non-descript cardboard box. The Woods Edge G.I. Battle Game from Helen of Toy featured 88 3D G.I. figures by GIANT (evidently in two colors - Green/Olive &amp; Gray), a Playmat, "2 Die Calculators" which were evidently Spinners of some sort according to the directions.