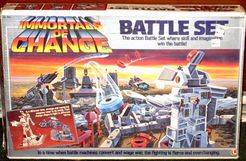 The follow up to Lakeside's action-strategy game Crossbows and Catapults, Immortals of Change takes the same basic gameplay and puts a futuristic twist on it. The object of the game is the same: players take turns using weapons (both "pivoting" and "forward firing", which amount to high-tech catapults and crossbows, respectively) to shoot projectiles at their opponent's forces. The prime target for these projectiles (and they are quite literally shot, using rubber-band powered mechanisms) are the five boundary sensors, which hide behind and around Protective Barriers and Battle Fortresses. The first to destroy all five wins. However, unlike Crossbows and Catapults, the weapons in Immortals of Change can be built into different configurations. While additional combinations are possible, the base Battle Set promotes five different official combinations: Battle Falcon, Bull Rover, Big Strut, Battle Creeper, and Robot. Each combination has both strengths and weaknesses. Additional expansion sets allow even more formations, objectives, and scenarios. From the box: In a different time, enemy warriors will do battle using strange and menacing weapons. You are the commander of your forces, your opponent, the commander of his. Both commanders have great arsenals of weapons that convert from offensive to defensive weapons as the tides of battle change. But the one who possesses the greater skill and better strategy will conquer. Immortals of Change - The fun is only limited by your imagination.