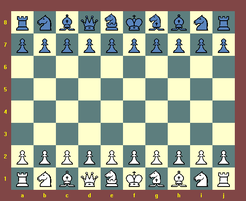 In 1874, Henry Bird proposed a chess variant on an 10x8 board with additional pieces; one with the combined movements of the rook and the knight, and the other with the movements of the bishop and the knight. In the first half of the twentieth century, world chess champion Jose Raul Capablanca (1888-1942) apparently improved on Bird's variant by rearranging the order of the major pieces. This variant became known as Capablanca Chess. And finally, in 1998, Ed Trice, founder of the Gothic Chess Federation, researched a setup which made a final improvement to Capablanca's arrangement, much as Capa had done for Bird.