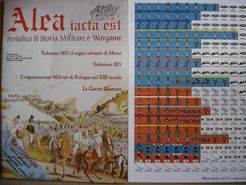 When Napoleon escaped from Elba in 1815, his former cavalry commander Murat was still King of Naples. He had switched sides the year before in an attempt to retain his throne, but he soon found that neither Austria nor Britain were willing to keep their promises. When Napoleon marched on Paris, Murat attacked the Austrians in Central Italy. He was defeated in the battle of Tolentino on 2 May. He escaped to France, but Napoleon did not want his services. After Napoleon´s defeat at Waterloo, Murat returned to Italy, where he was executed in October 1815. The not so well known battle of Tolentino is the subject of "Tolentino 1815" a Napoleonic wargame from Italian wargames magazine "Alea Iacta Est". It includes one unmounted 42 x 58 cm map and 216 thin cardboard counters, all in full colour. One game turn represents 2 hours of real time, and one hex is 250 meters. The rules and the magazine are in Italian, but the rules are also available in English.