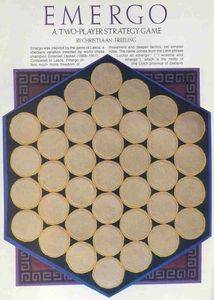 Emergo can be played on the black squares of a 9×9 checkered board (with black squares in the corners) using two sets of 12 stackable checkers. There are two phases to the game, placement and move &amp; capture. During placement, each player takes turns placing one piece on the board, unless a capture is available, which immediately takes precedence. Pieces may not be placed such that they force an immediate capture unless there is already a capture threat elsewhere or there is no choice but to place a piece in jeopardy. The last player places all of his/her remaining pieces on the board at once in one tall "shadow" piece. Players control stacks when their piece is on top. In the movement &amp; capture phase, players move one piece one square at a time to the next square (only on the black squares -- connectivity is four) or capture (mandatory when possible) the top piece of a stack under the bottom of another stack by jumping over it. Jumps can be repeated, and maximal captures are mandatory. The first player unable to move loses. As originally published the game used a hexagonal grid.