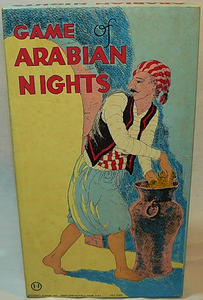 Old, simple roll dice and move game. Players shake the dice and then moves the number of pips shown on the dice, If a player stops on a scoring area he/she credits himself/herself accordingly. Then the player leaves the scoring area by any path that they want. You may go back alone the same path that you were on on the next turn. If a player winds up on his starting place by exact count at the end of the game he/she scores an additional 50 points. Player with the highest score at the end wins! Stopping on a penalty space causes the player to lose 10 points.