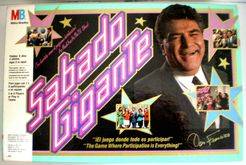 Players play as individuals or teams. Five of the six spaces on the gameboard get three cards. Each space has a separate deck with a puzzle on each card. Game one is Hangman using a historical name as a puzzle. Game two tests how well one knows the other players. Game three has the player trying to guess what noise another player is trying to make. Game four is true-false quiz. Game five challenges the players to guess the prices of merchandise. The sixth space gets its entire deck. This deck gives the lucky player who landed on it money. Which game is played is determined by rolling a die and moving one’s pawn on the gameboard. When all of the first five decks or all of the sixth deck is spent the players move onto the Grand Prize game. Anyone who can draw randomly all six parts of the picture of the automobile before drawing all three strikes is the winner of the game. The game is based on the long-running television series. Sabado Gigante translates into “Giant Saturday” in English. The game comes with Spanish and English rules.