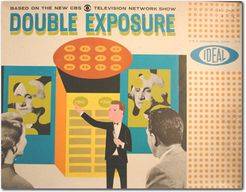 Based on the obscure 1961 game show, each player has a separate but identical picture to identify, both of which are covered with a different twelve-piece (numbered) jigsaw puzzle. A player chooses a number from 1-12 and activates a special spinner. The spinner will tell the player to choose a prize or take up to $50. The round is won by identifying the picture before accumulating $100. The player with the most cash and prizes after three rounds wins.