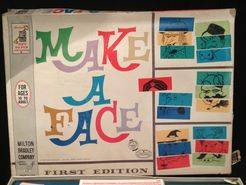 The caricature of a famous face is placed in a tray and covered with a six-piece jigsaw puzzle. Six cartoon faces have been cut into a top third, a middle third and a bottom third. Each group of thirds is scrambled and placed in a tray. To reveal part of the famous face concealed by a jigsaw piece a player has to remember the location of a complete cartoon face. Identify the famous face and player score for being correct and for each cartoon face assembled. The player with the most cash after three games is the winner. The game is a faithful recreation of a television series. The box says “first edition” although no subsequent editions were issued.