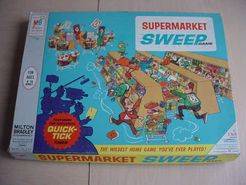 Based on the original (1965-67) version of the game show, played in two parts. During the first part, players guess the price of grocery items. During the second part, players sweep through the supermarket represented by the gameboard. The player who accumulates the most points in cards during the sweep wins. While Supermarket Sweep is most recognized for its Lifetime (1990s) and PAX (2000s) revivals, only the original ABC series tried a home conversion.