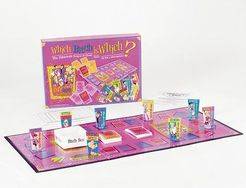 Which Bitch is Which? is a tongue-in-cheek game of wit and perception for 4 to 8 players—male and female. The basic premise of the game is that players use what they know about each other to score points. During each round of play, every player secretly draws another player's name from the "Bitch Box." Then, a question card is read; for example: "The art of Karaoke hit an all time low with bitch's rendition of...?" Players have to think of and write down a response befitting the person whose name they have drawn. As each answer is read aloud, players record the name of the individual whom they believe correctly matches the response. Correct matches are rewarded with points, which advance players around the board. "Super Bitch" cards add an element of chance—they can fast-track a player either forward or backwards. Which Bitch is Which? is a great party game that rewards perceptive observation and cunning responses.