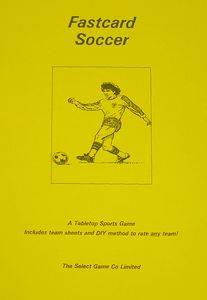 A representative of the 'replay' subgenre. Players run through a game of soccer using a deck of cards and a board, but have no actual control over the events in the basic game (though official variants included in the rule book *do* allow for choices on things like substitutions, making this a game) From the review by Mike Siggins: Ellis Simpson has been working on a soccer replay game for almost as long as I've known him. I think, having been privy to certain stages of its development, that the turning point came two years ago and Fastcard Soccer is the outcome. The resulting design emphasizes fast play (an admirable and difficult target), yet manages to retain many of the detailed trappings and flavour so important to the soccer fan. Well, this soccer game fan anyway. Like most replay games it is best enjoyed solitaire, but I have played some two-legged matches recently with a friend and these worked well enough. By way of a caution, please bear in mind throughout this review, as with Final Score, that I know next to nothing about football. What I feel I can comment upon is the atmosphere and game content of the system, and these are both first rate. The system uses, predictably, a fast action card system that generates almost all of the action. Reference to charts is needed for goal attempts or unusual results (the infamous Z card effects) and the game status levels, essentially the team's overall ratings, are tracked on the pitch display using counters. The rest is a matter of choosing which teams you want to pair off, logging their ratings on the display, and playing the game. The central structure, to a lazy bugger like me, seems like simplicity itself. Teams are rated for attack, defence and midfield. The latter ratings are compared to see which team wins possession and mounts an attack. A letter is read off, referenced to produce an attack number and then compared to the defence rating; if it is higher, the attack proceeds, if it is lower the attack breaks up, if equal there has been a clearance but the attacker retains possession. The whole setup runs on the highlight system by which, after each complete passage of play, a random number of minutes are marked off on the time display and the game runs through to 90 minutes, or longer if extra time is applicable. This method is now well established and it is an ingenious way of making sure that some ties have a lot of action and chances while other games are much like Arsenal at home to Arsenal. Game length will vary because of the use of highlights, but should take no more than a few minutes per match and it will get quicker as you become familiar with the card turning. The big selling point for me is that the game features a commentary system that runs straight off the Fastcards themselves. As the attack builds up, you read a comment off the card that may go something like 'A flurry of passes wins a corner; a dipping cross into the box....'. The next card is flipped to reveal, say, 'A header from the back of the six yard box'. The header may go towards the corner of the goal, only to be saved spectacularly or any number of other possibilities. I may be a sucker for atmosphere, but at the speed this all runs (once you are used to the mechanics), it really conjures up the images for me. It is very much like watching the league goals on Match of the Day. Oddly, given one of my criticisms of Final Score, the speedy handling of this seems to negate the problem of not knowing who is on the ball. You can readily work out who has the goal attempt, but it doesn't seem to matter as much who brings the ball upfield. The slight problem, and the only one in the game really, is that occasionally the commentary pairs don't seem to match up. Although this hasn't yet happened to me in about twenty games, other reviewers have mentioned it and I have seen it happen in the flesh. You might for instance get a header straight at the keeper, only to find him diving to get his fingertips to it. In this instance you can perhaps explain it away by a deflection or perhaps going the wrong way, but it does grate a little even for a man used to rationalising the weirdest German game systems. I can understand why this wasn't picked up (because of the large number of possible outcomes), but it must feel a little odd when it happens.