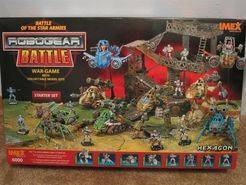 Robogear is a game system released by IMEX miniatures in the US, and Airfix in the UK. The game has 30mm-40mm miniatures that can be used with the free set of Robogear rules or for other miniature systems. The game uses a simple action point system. It also has 2 different firing rules which are used in the game: physical and virtual. Physical firing requires shooting a projectile on the miniature at a target miniature. Virtual firing is resolved using dice rolls. The rules also contain stats if players wish to use physical weapons as virtual ones. Most notable in the series are the modular building constructs.