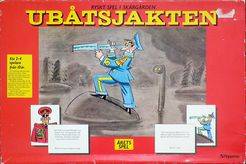 "A Russian game in the archipelago" A humorous game based on the series of submarine scares/incidents in the Swedish territorial waters during the Cold War, especially in the 1980's. In the game, U-boat Admiral Ragolin would like to throw a party in his home town of Kaliningrad - but all the caviar has been exported. Ragolin finds out that the Operakällaren (a famous restaurant in Stockholm) sells caviar so he orders up to 4 of his submarine captains (the players) to park their submarines outside the Stockholm archipelago and send a mini-sub each to get the caviar from Operakällaren. Each mini-sub advances on their own track towards Stockholm. Each track has a "handelsboden" (shop) and an anchored Russian "cargo" ship, where the players may get sent to by the event cards, as well as yellow event spaces. There are 2 decks of event cards; red "Soviet" cards are messages and orders from Kaliningrad (Ragolin, the Politbyro, etc.) and blue "Swedish" cards are events happening in the archipelago, where the indomitable U-boat hunter Captain Skeppström and his Sea Scouts are ever watchful (every monday to friday from 08:00 to 17:00) with their special weapon, the Swedish delicacy surströmming. First player to reach Operakällaren is the winner and gets invited to the Admiral's party, while the rest can look forward to service in the arctic icebreaking fleet for the next 15 years.