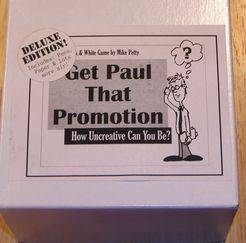 From the B&amp;W Games Site: The Background Everyone's a stressed out, underpaid "sloganeer" working for The Name Game. Then there's this guy named Paul whose wife left him and he's neck deep in debt from the shrink bills for him and the kids. He's so low he hasn't come up with a decent product name or slogan in months. Then one morning, in a rare-for-the-workplace personal moment near the coffee pot, Paul opens up to everyone. "Yeah, the boss, he's saying I'm up for a promotion this month...if I can just turn out some good work. You know I've been a little off lately. But I think the therapy is helping...a little. And, uh, well, anyway, would you guys please not try so hard for the next couple weeks?" You get the picture. The Game Get Paul That Promotion is a hilarious game where everyone tries hard to be uncreative, but not so uncreative they get fired. It's for 4-6 players, Ages 12 and up.