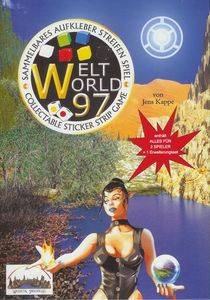 A unique collectible "stickerstripgame" with an epic fantasy background story, W97 is a new type of game for two players of ages 10+, which combines collecting and pasting of stickers with unusual game mechanisms. In W97, players put together different sets of heroes, places, spells, victory conditions and much more based on a large supply of available stickers. The game is played on "terrain strips", which are divided into five quadratic fields next to each other, where the stickers are placed. Every player puts together an individual place- and hero-set for a game of W97. A place-set is made up of six terrain strips Forest, Water, Desert, Swamp, Mountains and Grassland, where the stickers of tower, ruin, castle, city, cave and temple, that have to be conquered, with different amount of points on them, individually are pasted on. A hero-set is put together of different heroes, representing the leaders of each player's armies (which are available in the game as small colored wooden cubes, that are placed next to the strips), who have to be distributed among the six terrain strips as well. In W97 no general victory conditions are available for both players. Each player must setup the best fitting victory conditions for their places and heroes in their own game-sets themselves. Success and failure in W97 is determined by a well put together game-set, the strategy of the player and the overall luck of dice rolls. New players will find an easy and fast introduction into W97 through the basic set, which comes with pre-configured, presorted strips for two players. It is even not necessary to paste stickers onto the terrain strips, because all places and heroes already have been printed together with the terrain types in advance. In addition the basic game includes 6x60 wooden cubes, five color dice, a German and an English rulebook each and a randomly chosen Expansion-Set. (Based on information from Wassertal Spieleverlag.)