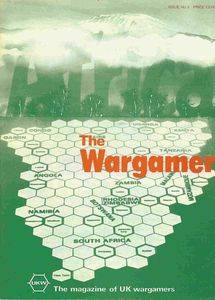 Originally published by 3W in The Wargamer Magazine issue 3 in 1977. From the introduction: "Each player takes the role of one of the (super)powers attempting to establish or maintain a sphere of influence in the Southern half of the African continent. By interfering in the economic stability and political alliance of nations, and by subsidizing them, the players attempt to extend their political control of Africa, while diminishing the control of their opponents." Combination of simple wargame, including zones of control and CRT, and game of political influence. Players expend treasuries to influence South African countries, using the expenditure to gain control of them through rising up the political influence table, or to destabilize them, weakening their armies and causing revolutions. Three page rules pack a lot in to a small package. Game components include a map and 154 counters.