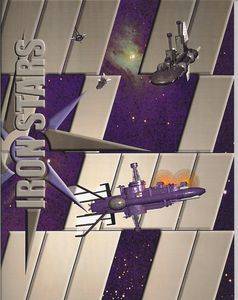 Iron Stars is a game of space combat in an age of steam and steel. Set in a fictional universe based loosely on the writings of H. G. Wells and other fantasists, it provides a back story and ship designs from an alternate history in which the Martian Invasion actually happened, the ether is all-pervasive, and Cavorite is a reality. But, as with Starmada and other Majestic Twelve Games products, the focus is on players' imaginations; a clear and concise ship construction system is provided so you can pit your own space dreadnoughts against the likes of the Royal Navy Ether Squadron or the German Äthermarine.