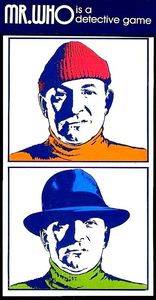 3M published games in several different well-known packages - bookcase boxes, mini-bookcase gamettes, "butterbox" gamettes, and flatbox sports games. They also published a few games in other formats, one of which was the "crackerbox" format used for Mr. Who (Bid &amp; Bluff is the only other game published in this box type). The game, Mr. Who, is a somewhat unusual deduction game. There are 32 Suspect cards which show pictures like those on the outside of the box - the suspect is always the same man (Robert de Niro look-a-like) but could be wearing one of four different hats, sunglasses or not, and one of four differently-colored sweaters. There are also 32 Mr. Who cards which have written descriptions that match the Suspect cards, but with the characteristics in random order. In each round, one player is Mr. Who and picks a Mr. Who card - the other players are detectives and try to deduce which suspect he is. They play cards to the grid on the board to get information on the three items on the Mr. Who card. During this process Mr. Who commits more crimes and the reward money increases. After everyone has been Mr. Who once the player with the most money wins. The board is made of vinyl. A little metal car is used to track Mr. Who's progress. The reward marker is a generic plastic pawn.