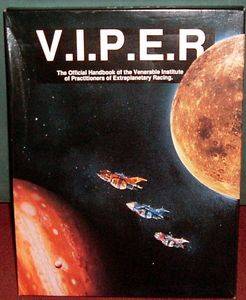 V.I.P.E.R. or The Official Handbook of the Venerable Institute of Practitioners of Extraplanetary Racing (which is quite a mouthful by any standard). The game is a basic space racing game with a free form construction and movement system, similar in concept to things like Full Thrust and Car Wars where there is a large amount of work to be undertaken before the game is actually playable. The game comes with a die and counters for ships and marker buoys but could easily be played with spaceship miniatures. As with Car Wars, the game has both a race component and a "blow the opponent out of the sky" component.