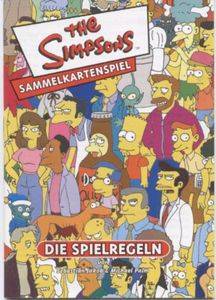 Although not nearly as well-known as its Wizards-produced counterpart, Dino Entertainment released a totally different Simpsons Trading Card Game in 2001 in Germany. The Simpsons Sammelkartenspiel features a base set of 211 cards, as well as three expansion sets: Krustys Surf Camp, The Simpsons Horror, and Extreme Sports. Cards were published in pre-constructed Character decks, as well as in booster packs. Characterdecks were: Bart&amp;Lisa (2-player), Homer, Ned Flanders, Mr. Burns in the 1nd edition; Krusty in his expansion; Horror. Dino did try and license/sell this game to Wizards when Wizards was developing its own Simpsons TCG, but Wizards turned them down. As such, this is a totally different game than the Wizards one, although many people still confuse them for being one in the same.