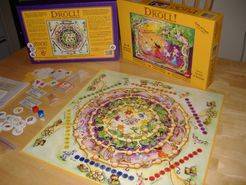 Puck! turns William Shakespeare's romantic and most enchanting comedy "A Midsummer Night's Dream" into a hurly-burly "in-teamacy" chase. In the woods near Athens three to six enamored asses are in search of their partners. Because of Puck, the asses are always in love with one of several possible asses. Yet, only one ass is the right partner. By meeting other asses frequently, you can climb the fairies' ladder. But those who are unfaithful and visit the "wrong" asses too often support their opponents. Titania, Oberon, Elves, presents and the Wall add tactics to the game. In the romantic version, the players themselves are the asses. They exchange vows of love, turn each other down and give each other romantic presents. The children's game is played without the fairies and thus moves ahead much faster.