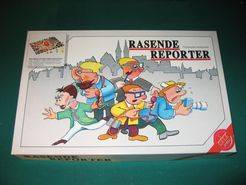 This game involves luck, bluff, skill and fast reaction. A lot of dice rolling is involved. Movement is determined by a number die. The players represent reporters, who have to get a theme (on red event spaces)and a buyer (on green buyer spaces). If a player gets a theme he has to create a Headline, while moving his meeple to the buyer space. On arrival at the buyer space he has to present his headline and gets points (chips) awarded. The lenght (number of words) of the headline is determined by the distance between event space and buyer space. Long headlines get more chips than short ones. The event spaces and buyer spaces are chosen by a funnel action. If a player playes a funnel action he rolls the number die and the letter die to determine coordinates for a section on the game board. In each section there are one or two event spaces, buyer spaces or penality spaces. If any player wants to use a space in the given sector, he throws his pellet into the funnel. The player whose pellet gets into the bottom of the funnel gets to chose one of the available free spaces in this section and puts a task marker on it. If a player has'nt payed attention and the only free space is a penality space he has to put a task marker on this space and can't take place in another funnel action till he has moved his meeple to this space to reclaim his task marker. The game ends if a player gets a prior agreed on number of chips and has completed all his tasks (headlines)and wins the game.