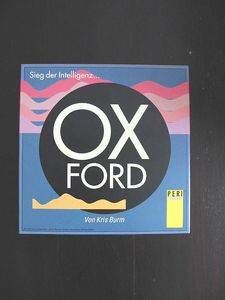 Contents: 12 pieces per side; each with O on one side, X on the other. The board starts with each player having 6 pieces in play; 3 with each symbol. Each turn, a player brings a new piece into play, or moves a piece a distance exactly equal to the number of pieces they own matching that symbol. At the end of a move the piece is flipped to show the opposite symbol. Movement is orthogonal; forwards or sideways, but never backwards. An opponent's piece may be captured by replacement, and lost pieces may be regained by moving to the opponent's starting row. To win, put the opponent in a position where they only have pieces with one symbol in play - it doesn't matter which one!