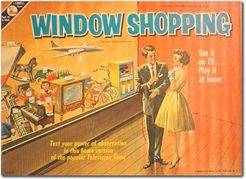 The game master secretly creates a picture using the cutouts provided. Players score for points for each element each one can recall from memory. The player with the most points after two rounds plays the prize round. The player is the prize round gets one second for every point of the winning score to recall as many prizes as possible. Each prize recalled is worth one prize point. The player with most prize points after two games is the winner. The game is a faithful adaptation of an obscure television show.