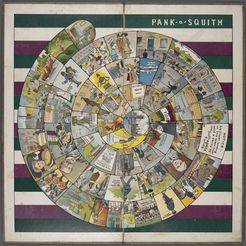 A race game played on a spiral board. The game took its name from political opponents in Edwardian England - the suffragette leader Emmeline Pankhurst (1858-1928) and Herbert Asquith (1852-1928), Prime Minister from 1908 to 1916. The game was first advertised in Votes for Women on the 22 October 1909 and many of the references to recent events are illustrated by the squares. The illustrations on the board show the difficulties encountered by Pankhurst and her supporters in the militant suffragette movement. Comments from The Jon A. Lindseth Suffrage Collection The Pank-a-Squith board game was first advertised in Votes for Women on 22 October 1909. It comes with six painted, cast lead, figures for the suffragettes. The board is stamped "Made in Germany" on the back. The goal of this board game is to reach the Houses of Parliament, the pinnacle of achievement for the campaign for Woman’s Suffrage. Although designed to be humorous, the images evoke the darker side of the campaign, making reference to police violence against women protesters and the force-feeding of imprisoned hunger strikers.