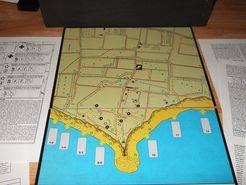 Rudder’s Line is an AREA MOVEMENT game that simulates The Battle of Normandy, specifically the landing of the 2nd Ranger Battalion at Point du Hoc on D-Day, 6 June 1944. Players take the sides of the German 726th Infantry Regiment or elite US Army Rangers of the 2nd Ranger Battalion. Following an unprecedented invasion by landing and cliff-scaling in the face of enemy fire, the battle devolved into the quintessential hedgerow battle in Normandy’s bocage. The Rangers were literally ‘backs to the sea’, cut off from friendly forces until a relief column reached them from Omaha Beach on 8 June 1944. The German defenders pushed James Rudder and his men to the point of annihilation. It was a ‘near run thing’. The game depicts the hedgerow fighting that followed the D-Day landing of the 2nd Ranger Battalion. It is meant to be a hard-hitting, fast playing board game that recreates the close-in and deadly nature of the battle, fought for each individual field. Game Scale: The game is scaled at about 100 yards to the inch. Units for both sides are small groups of soldiers approximating squads, non-commissioned officers, FO’s, weapons crews, and individual machine-guns, mortars, and shoulder-fired Bazooka and Panzerschreck rocket launchers. Each game turn represents six hours. Game Board: The game board uses a US Army map of the battlefield, divided into a collection of 35 numbered areas or ‘sectors’. Areas come in various shapes and sizes, with a dotted green border separating them. Each area contains two numbers: an identification number in a green box, and a Terrain Effects Modifier number (proceeded by a + sign) in a yellow circle. What You Get: One 11" x 17" hard backed game board; 80 color mounted die cut counters; One 4-page rulebook; Players must provide one or more six-sided dice.