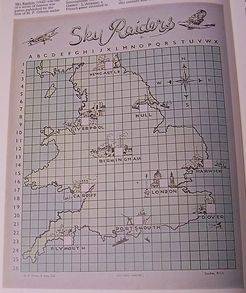 Sky Raiders portrays the German Airforce assault on British cities during the 1940-41 Blitz. A double-blind war themed game of air combat with similarities to Battleship, but with a moving target. Each player has an identical map of Britain which is kept secret from the opposing player. The Raider player moves his squadron across the map trying to bomb target cities. The Defender gets to call out squares in attempts to hit the Raider's aircraft.