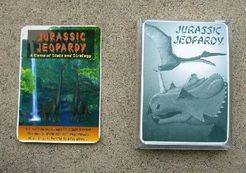 A game of Stats and Strategy. Players are dealt a deck of cards. Each card is a different dinosaur with five different stats. The game starts to the player to the left of the dealer. The players whose turn it is play there top card and reads off a stat from it. Each other player then shows their top card and reads off the corresponding stat. The player with the highest value stat then collects all the other cards and places them at the bottom of their deck. The game then proceeds by moving counter-clockwise with the next player revealing their top card and announcing a stat. Game continues until there are only two players left. At which cards are discarded rather than collected.