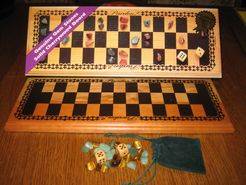 This game has some of the mechanisms and goals of backgammon, but is played on a 3 by 15 grid. Like backgammon, the challenge is to move all your gemstone pieces to the opposite side of the board according to the throw of two wood dice, while attacking and avoiding attack by your opponent. Players have to keep two pieces on a square otherwise they can be captured by the opponent and returned to the start, however unlike Backgammon, players miss a turn if they throw doubles with the dice and cannot place more than two pieces on a square. Pieces can be moved sideways, but each square moved is counted, so beware. This game requires strategy and the player who sends their opponent back to the start the most is more than likely to win. Editions are available with gold and silver plated aircraft playing pieces and wooden dice.