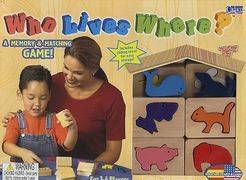 In this childrens game, each player is given a set of different animals. Twelve wooden houses are placed in a circle in front of the players. During a turn a player will select an animal from their set and move it beside one of the houses. The player then lift off that house's roof and places their animal inside that house. But, if there is already the same kind of animal inside that house, the player takes their animal back and it is the next player's turn. The player who gets rid of all their animals first is the winner. This game, translated to English as "Who lives where?", is available in two designs. One design contains the following animals: elephant, duck, rabbit, hedgehog, camel, cat, crocodile, rhino, seal, turtle, pig and whale. The other design contains the following animals: dolphin, cockatoo, bat, fox, cock, shark, kangaroo, hippo, parrot, snake and goat.