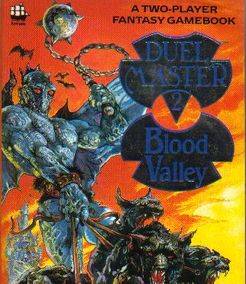 Similar in some regards to the Ace of Aces book series, Duel Master takes 2 players, each with their own book, into competition with one another. Play is paragraph based, with each player making their own choices about what they want their character to do. In Blood Valley, one player takes on the role of the evil Archveult, a great, demon-like being. Every year in the Spring, the Archveult selects a prisoner to be set loose, as quarry, in the circle of stones. With only a few hours lead, the quarry is to try to find his/her way out of the valley, evading the Archveult who is led by his Hell Hounds, and who has laid traps for the quarry throughout the land. The Archveult also has his son, the Demiveult, his assassin Ka-riim the Hashishin and Kritos Bloodheart, the Captain of the Guard to help him hunt. The quarry player has his choice of three characters to play, the Priest, the Barbarian or the Thief.