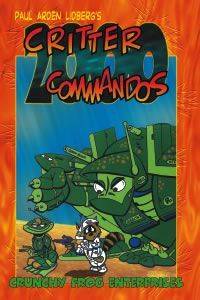 CRITTER COMMANDOS is a game of squad level (and larger) combats that occur in a universe gone mad. All the combatants are modeled after Saturday morning cartoon characters, and that the damage caused by the weapons isn't really real! Each bit of damage puts a "hole" in the character (just like a cartoon!), and when they've taken enough holes, they are out of the game. But they come back for the next episode, safe and sound! This game is intended to be a fast and fun introduction to the world of miniatures games. Each soldier has an INDEX that tells you how fast it is, how smart it is, how well it can shoot, and more. They also have a list of whatever weapons they carry. Using this, you as the player control how the battle unfolds, and try for ultimate victory. The combat is quick-paced and east to learn. It uses a single roll on a ten-sided die to figure out any combat. The emphasis is on fun and excitement, not massive tomes of over complicated, supposedly "realistic" systems that bog down in too much detail. In 1992 a supplement with roleplaying rules was released, see the RPGGeek entry Critter Commandos Compendium.