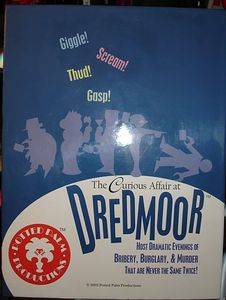 On the surface, this is a murder mystery party game that advertises to never play the same game twice. This is accomplished by making it more of a card game that is played out in different rooms of the house in live scale fashion. Players are given a character, which is only for theme. However, each character is attempting to collect sets of a specific type of card (Ambition, Passion, or Greed). Each player starts the evening with 4 cards. Most of these cards will be either Ambition, Passion, or Greed cards; however, there are four weapon cards also distributed. Throughout the house will be four "vaults", each of which has a face-down card. The player's goals are to: - collect 4 cards of their desired type - determine who burgled from the vaults - determine who murdered other players The first step in the game is that players stand in a circle and show two of their cards to the player on the right and the other two of their cards to the player on their left. When the game begins, players can do several things to improve their hand: - They can trade cards with another player. - They can trade cards with a vault. However, the first player to do so is considered to be burgling the vault. Future trades with the vault are not considered burgling. - They can commit murder. They need a weapon card and they need to get another player alone. They whisper "Bloody Murder", and place the weapon card in the victim's name badge. The murderer may then look through the victim's cards and take one. The victim lies "dead" until someone finds the body. The person who finds the body may trade one card from the victim's hand, then the victim is alive to continue the game (with a hand of three cards and an exposed, used murder weapon). After one hour, the players are brought together to discuss the evening. Each of the burglaries and murders are discussed. Murder victims lose points if the murderer is discovered, so it benefits them to keep quiet or to lie about the murder. Players then records their accusations for the four murders and four burglaries. Points are totaled as follows: - Each correct accusation: 10 points for the player, -10 points for the Murderer/Victim/Burglars involved. - Each clue card that matches the motive of the player: 50 points.