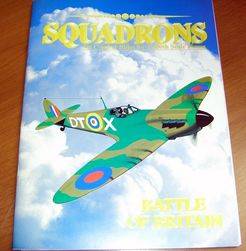 Squadrons is an easy to learn, yet challenging, game of aerial combat in World War II. This rules set contains the game system's complete rules and play accessories plus specific rules and scenarios to re-fight the classic aerial engagements of the Battle of Britain. With these rules you can experience the tension and excitement of leading a squadron of fighters to intercept a massed formation of bombers and their fighter escorts. Or, fly the large bomber formations while fighting off the relentless enemy fighter attacks as you commence your bombing run. These rules are designed for the player who is looking for a concise, fun set of rules which allows you to control a large number of planes in a game of reasonable length. A few players can finish a complete game using 20-30 planes in about one or two hours using an innovative movement and combat rules system providing realistic World War II air combat.