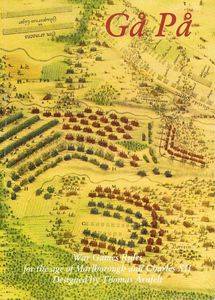 Miniature wargame rules for The War of the Spanish Succession 1701-1714 and The Great Northern War 1700-1721. The players take command of the armies of Marlborough, Prince Eugene, Louis XIV, Charles XII of Sweden, Tsar Peter the Great etc. The game is focused on command and control (or the lack of it in this period). The commander in chief and the wing commanders of the armies have a fixed number of opportunities per turn to try to give orders to units, depending on their abilities. Units without orders act with a kind of artificial intelligence depending on unit type and troop quality. For example, heavy cavalry with good morale will generally charge nearest enemy unit within sight. The presence of retreating or fleeing friendly units increase the chances that a given unit also will retreat/flee etc. Battlefield visibility decrease as the battle proceeds, so commanders and units will have an increasingly harder time to see each other. Optional figure scales and basing. Each battle have two sides, but several players can easily take the role of a wing commander each. The rules provide army lists and optional rules that may be used to provide greater detail and a more tactical feel, as desired by the players. A separate, 98-page book on Armies of the War of the Spanish Succession and the Great Northern Wars has been published by the designers giving greatly detailed army lists along with additional new and optional rules.