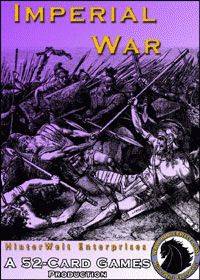 A variant of the classic card game War incorporating resource management and strategy. The game can be purchased and downloaded at RPGNow.com. The game includes 6 pages of rules and one map. The setting of the game is the world of the Roman Empire, with the mechanics of War being used to resolve combat. Random events (whim of the Gods) also play a role in the game. Not included but required to play are tokens (30 for each player) to designate troops in occupied territories, a regular six sided die and a regular deck of cards.