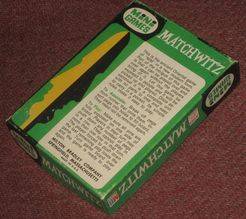 MATCHWITZ is the classic game of NIM presented as a green plastic tray, roughly 4" x 6", through which are several rows of white plastic pegs that can be pushed to expose them one one side or the other. The pegs were arranged in three of four horizontal rows of descending length, and the horizontal rows were offset so that each peg is part of one horizontal and two diagonal rows. From the package: "MiNi GAMES MATCHWITZ This is the ancient Oriental game of "NIM" in a new modern form. Part of the intrigue of this game is that it can be played over and over again without the players tiring of it. Let this game be exposed to people and it will be picked up and played. Once assembled it is a complete unit with no parts to lose and easy to carry in a pocket. Its [sic] simple rules make it easy to play. To Assemble: Break off pegs from runner that joins them. Insert pegs into holes to fill board. They need not be removed again. To Play: Make sure all pins are fully exposed on one side of the board. Players in their turn may push down any number of pegs in a row. They cannot play in more than one row in that turn. The player forced to push down the last remaining peg loses the game. Turn game board over and the game is ready to play again. MILTON BRADLEY COMPANY SPRINGFIELD, MASSASCHUSETTS MADE IN U.S.A."