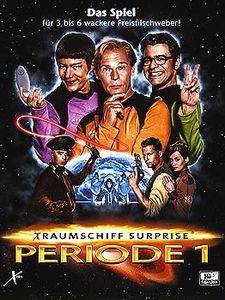 The game is based on a successful movie of the same name. Each player gets a number of chips with which to bid on cards of various colors. Bids are hidden and simultaneous, high bid gives his chips to the lowest bidder (in case of a tie, the next highest non-tied player wins). Each card, once obtained, has an assignment / action on it that must be carried out. There are also Taxi cards that make players do certain things and bad cards (Jens-Maul Cards) that are awarded randomly but in typical party game fashion: when a bad card turns up, each player has to run to the anti-gravity machine (set up somewhere else in the house, for example) and press the button. Whoever is randomly selected by the player has being the heaviest (i.e. too fat to float) gets the bad card. Each bad card increases the number of cards in a single color needed to win by one: normally you need three of a kind, so having one bad card ups it to four.