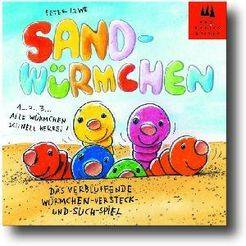 Sandwürmchen (Baby Sand Worms) was invented by Peter Lewe. The children get a box with real sand in it, complete with a plastic cover to keep the sand from running out. There are six spaces in the bottom of the box, into which the colorful baby sand worms are pressed until they are no longer visible. The box is then turned around several times, so that nobody can remember exactly where each color of worm is located any more! Each child then receives cards with baby worms of various colors, after which the game begins. In turn order, each child tries to find a worm of the colour that matches their topmost card. This they do by carefully digging in the sand. What color appears? If it's the right one, then that child gets to try and reveal a worm that matches their next card. If it's the wrong one, then maybe he'll have better luck next time, once several worms have been discovered. The box is turned around at the end of each round, so players have to pay close attention to where the worms are! At the end of the game, once all cards have been assigned to their worms, each child gets to place a marker where they think a worm of the matching colour is located. Then comes the exciting ending: one child gets to rattle the box until all of the worms have poked their heads out of the sand. Who was able to guess right? [[Games by player age|Ages 4 and up]].