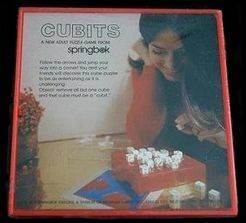 This fun little game comes in a plastic box that doubles as the playing field. The field features 36 squares. There are 32 "cubes" (i.e. dice) used in the game. The dice feature directionals on five sides and the word "Cubit" on the sixth side. At the start of the game, the cubes are randomly placed on the field, with the four corners left empty. From the instructions: A cube may jump only in the direction (or one of the directions) indicated on its upturned face. However, when the word "Cubit" appears on the upturned face, that cube may jump in any direction, except diagonally, which is never allowed. In the two-person game, each player removes as many cubes as possible as long as he can make a jump with the same cube. The player who has jumped the most cubes at the end of the game, when no more moves are possible, is the winner. In the solitaire version, the win occurs when only one cube remains on the board, and it has "Cubit" on its upturned face.