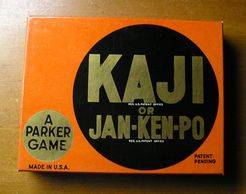 "KAJI is based on a Japanese game (JAN-KEN-PO) centuries old, in which the hands are used as symbols." A.k.a. Rock-Paper-Scissors. There are four suits of 12 cards each, numbered 1 -12. The suits are JAN (stone), KEN (scissors), PO (paper) and KAJI (fire). The main version is the 4-player (possible partnership) game, with 2, 3 and 5-player variants. In the 4-player game, 11 cards are dealt to each player and a 4-card NEKO (kitty) is set aside. There is one round of bidding where each player has one opportunity (in clockwise order) to bid on how many tricks over a book of five she will win. High bidder (Declarer) picks up the kitty, discards 4 cards and then sets trump. Declarer may elect to play the hand alone or chooses a partner by asking for a particular card. Whoever holds that card must show it and becomes the Declarer's partner. The remaining 2 players become partners. Seating order is not changed when the partnerships are formed. When the KAJI suit is trump, the value of the other suits depends upon the order in which the suits are played and follow the traditional Rock beats Scissors beats Paper beats Rock order (JAN-KEN-PO). However, if not declared trump, KAJI is always the second ranking suit (ex: if JAN is trump, suit rank is JAN-KAJI-KEN-PO). Only a higher trump card will beat another card in the trump suit. Declarer leads any suit. Play proceeds clockwise in turns, and players must follow suit if possible. If a player cannot follow suit, she may play any card. If it is a card of lower suit than the previous card, it is regarded as a discard and does not change the current suit. If it is a card of a higher suit, that becomes the current suit. Say Scissors is trump and a Rock card follows a Paper card that is lead. Paper is still the suit to follow or beat. Say Scissors is trump and a Paper card follows a Rock card that is lead. Paper is now the suit ro follow or beat. The winner of each trick leads the next. When playing in partnership, if the Declarer's partnership achieves or exceeds its bid, each player in the Declarer's partnership scores 5 points for each trick over the book of five that was bid and 10 points per trick over the bid if applicable. If playing alone, Declarer scores 10 points for each trick over the book of five. If Declarer's partnership does not achieve or exceed its bid, each opponent receives 10 points for each trick they fell short. If Declarere is playing alone, opponents receive 20 points for each trick by which the contract failed.