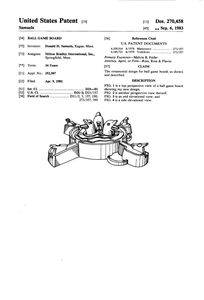 This electronic game (named to capitalize on the disco craze of the late 70s/early 80s) is similar to "Hungry Hungry Hippos". The game unit is a motorized turntable with 3 plastic dolphins that rise up and down (i.e. disco dance) while opening and closing their mouths. Four Shooters (catapults) are positioned around the board. Players place 7 marbles in their shooter track, which feeds into their Shooter, before starting. The unit is then turned on by pulling up on the center buoy causing the turntable to spin while the dolphins dance and open their mouths. Players simultaneously try to shoot their marbles into the open mouths. If successful, the marble drains into a side tray by the player's Shooter. If unsuccessful, the marble drains into a random player's shooter track thus giving that player more ammo. When the game ends, the player with the most marbles in his or her side tray is the winner.