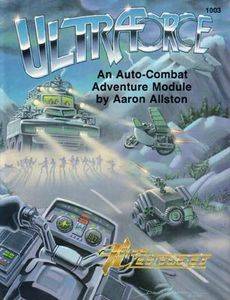 This is the third product from the AutoVentures line – a series of auto-combat adventure modules by Aaron Allston. This module includes some maps, Battlecars cards and a fairly extensive quick combat system (much improved from the one presented in Hell on Wheels.) Full games stats are included for Battlecars, Car Wars and Highway 2000, allowing the game to be played with any of these systems, or by itself using the provided quick combat system. Like the other modules, Ultraforce includes a background of the world of 2012, (including this time a focus on the Ultraforce team and the American Southeast) and an adventure designed to be game-mastered against one or more players playing the Ultraforce team. Lots of extra background information is provided so this could be used as a starting point for a much larger campaign. Two complete scenarios are provided, pitting the Ultraforce teams ATVs and hybrid aircraft/motorcycles against a variety of opponents, eventually pitting them up against a giant Juggernaut.