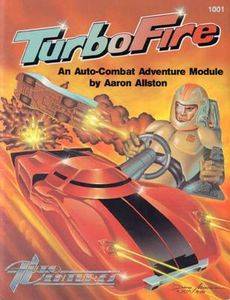 This is the first of the AutoVentures published, a series of auto-combat adventure modules by Aaron Allston. This module provides a rich setting for Grand Prix racing in the year 2012 suitable for use with Battlecars, Car Wars and Highway 2000. Sample characters, motives and plot ideas are included, allowing for the easy add on of role-playing elements. Included are a map of the racetrack and surrounding area, maneuvering charts for Car Wars and Battlecars (for the high top speeds) color counters and the game booklet itself. The book has several pages on general background of 2012 and racing in this environment. Full details for eight countries worth of racing cars (with stats for each game system) are included. Extra rules include those for traveling at high speeds and details for equipment to use. Finally there are guidelines for converting between the three game systems. Playing out an entire race in the scale of these games would be tedious an boring. Therefore TurboFire provides a framework to play out the race in a general sense – abstracting the race itself so players only need to drop into regular game scale for skirmishes that occur as cars near each other. This item also exists as a rpg entry: TurboFire