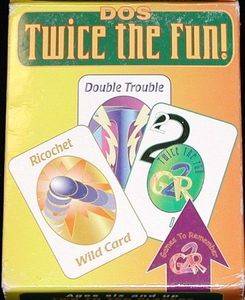 This game is, in reality, a variant of the popular game Uno; albeit with different cards. Thats not to say that it's the same game, however. The differences in the cards can lead to some interesting game play - some cards allow you to pass cards to another player, reverse or bounce other penalty cards, or even trade hands with other players. The large number of players allowed also makes it good when you want something on the fly for a large group, as it's easy to learn and relatively quick to play.