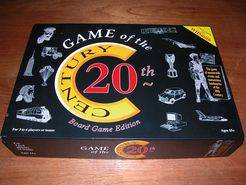 The game of memorable events and landmarks of the 20th Century. This game is a trivia board game with questions about the events of the 20th Century. Ordinary question cards have 6 questions on them (2 from a decade in the first half of the century, 4 from a decade in the latter half). There are also picture questions cards. Some spaces on the board dictate which pair of decades the question will come from (which question on the card is determined by your die roll), some spaces allow you to choose a decade pair, some have you take a picture card and some a twist of fate card. You collect tokens for correct answers until you fill your Year Board, then you initiate a bonus round. The winner of a bonus round receives a Game of the Century token. You play either to a certain number of tokens, or to an agreed time limit (at which point the player with the most tokens wins).