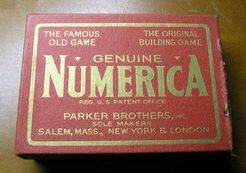 This is basically a form of solitaire, played solo or competitively. There are 4 sets of 52 counters. Each player's set consists of 52 counters of the same color, numbering from 1 to 13 inclusive, 4 of each number. One player (the "leader") turns their counters face down and mixes them up. All other players keep theirs face up and orderly, so they can find the numbers quickly and easily and see what numbers are left. The leader draws a counter and announces the number. All players take a counter of the same number from their set. They may play it to one of 4 columns or one of 4 stacks (foundations). Stacks are started with a 1 and go up sequentially to 13. If a number cannot be placed on a stack, it must be placed at the bottom end of one of the 4 columns. It is most desirable to place counters on columns so that the columns are in descending order. The only way to move a counter from a column is to move it onto one of the stacks. Only the counter at the bottom end of a column may be moved. Continue drawing until all counters have been placed. Your score is the sum of the numbers on the top of your stacks. Each player in turn takes the role of leader and reads off the numbers. Highest score after an agreed-upon number of rounds wins.