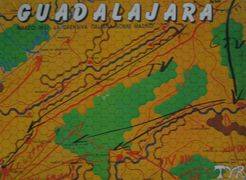 Guadalajara is a strategy game that reproduces the battle of the same name happened during the Spanish Civil War from 8th to 23rd March 1937. This was the last attemp of Franco to conquer the spanish capital, this time using the powerful Iatlian army corps to encircle Madrid from the Northeast. The battle resulted in a shocking defeat of the franquist forces. It's a game for 2 players, one controlling the Italian forces and the franquist Brigada Marzo, with the other player commanding the units of the 4ª Division of the Army of the Republic.