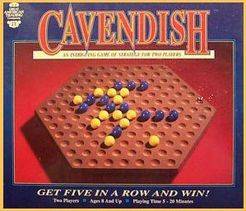 From promo material: "Maureen Hiron's first boardgame was invented whilst playing bridge at the Cavendish Club in New York. An intriguing game of strategy for two players. Capture your opponents pieces - dominate the board. The large hexagonal board dismantles into six identical pieces to fit into the compact box." The game appears to be Pente on a triangular grid, but with the addition of a capture rule that allows you to remove two of your opponents stones by jumping one of yours over them.